Get Rid of this Track! Or not…

Hello again, fellow IndyCar fans!  I’m sure you are all surprised to see a post from me.  I’ve been very bad about posting here, and I could give you a long list of reasons why that is the case, but I won’t.  I will, however, tell you what it is that has led me to make an appearance now.  Some of you will not like this post, and that’s fine.  We are all different people with different thoughts and opinions.  As long as you remain respectful to me (even if you think my opinion is absolute garbage), I have no problem with you.  I actually enjoy hearing from people with different opinions, as life would be very boring if we all thought and felt the same way about things.  We may not change each others’ minds, but that doesn’t mean we shouldn’t still listen.

Last night brought us the running of the Firestone 600 at Texas Motor Speedway.  I actually enjoyed the race.  There were many great battles, no crashes, many different strategies, and overall a safe, fast race.  It also helped that Marco Andretti, my favorite driver, continued his post-Indy resurgence by finishing P5 and remaining the only driver to complete every lap of every race this season.  (More about that in another blog post to come in the next few days, if life cooperates.)

I try to do my best to stay off of social media during races.  If I get an e-mail saying someone has mentioned me in a tweet, I may respond during the race, or I may wait until after.  I like to immerse myself in a race, watching the TV coverage, following the leaderboard on racecontrol.indycar.com, and using the 3D track view with driver radio on my IndyCar 15 app.  Sometimes I will listen to IndyCar radio rather than the TV broadcast.  With few exceptions, I stay off of Twitter and Facebook during the race.

Last night after the checkered flag flew, I picked up my phone to silence it for the night.  I had my TweetCaster app open, and as I was expecting, there was a lot of post-race reaction among the IndyCar people, blogs, and news sources I follow.  I wasn’t surprised to see people all over the place with their comments on the race, but I was surprised by two things, based on past comments by this same group.

First, people were calling for the removal of Texas Motor Speedway from the IndyCar schedule.  And second, people were decrying the team choices that led to the spreading out of the field–basically saying the use of strategy in the race made it boring.  I’ll address each of these issues individually.

The people calling for the elimination of Texas Motor Speedway mainly said because only 5 drivers finished on the lead lap, the race was horrible and therefore IndyCar should not return to this track.  I will agree with the opinion that racing at TMS has not been the most exciting since the debut of the DW12.  Different things have happened over the past 3 years in an effort to improve the racing, with varying results.  (See point two for further discussion of this.)  I saw people screaming that TMS should be stricken from the IndyCar schedule in favor of tracks such as Circuit of the Americas, Road America, and Kentucky, just to name a few.

Let me make it clear–I would love to see IndyCar racing at any of those tracks, and many other tracks that are not on the current schedule.  (I would also dearly love to see IndyCar return to the streets of Baltimore, for many reasons–first being the less-than-one-hour drive from my home.)  But unless I’m missing something during my daily perusal of any bit of IndyCar news I can find, these tracks aren’t exactly screaming for IndyCar to come to them.  It’s not like Mark Miles can just say IndyCar would like to go to a track and have it happen.  It’s a sad truth that there are a limited number of venues available to IndyCar right now.  So while you are screaming for TMS to be eliminated from the schedule, don’t be so sure there would be a track to take its place.

As for the idea that a small number of cars finishing on the lead lap supports removing the track from the schedule, I admit I have a very hard time understanding this.  There have been Indy 500s where only a handful of drivers finished on the lead lap.  Does that mean we should start calling for Indianapolis Motor Speedway to be removed from the IndyCar schedule in favor of another track where the entire field can stay on the lead lap?  Maybe if there was social media back in the days when that happened at Indy, people would have been saying the same types of things they are saying now.  I kind of doubt it, however.

I am particularly baffled by the people complaining about strategy and team choices ruining the racing.  Ever since the DW12 was introduced, I’ve heard people begging and pleading for the addition of aero kits, and complaining about the delay in their implementation.  Now the aero kits are here, and those same people are still complaining.  We weren’t supposed to want spec racing (although I still feel there is something to be said about a driver who can drive the same car as everyone else better than everyone else, so he or she consistently finishes on top), and now that teams have choices in how to set up their cars, it’s bad because the field is too spread out?

Strategy races–be they fuel strategy, rain/slick tire strategy, pit stop strategy, or which aero kit parts to run with–can admittedly be somewhat less exciting than races that are solely based on passing out on the track, but that doesn’t mean they aren’t real racing.  I don’t want to see cars bunched up, bouncing off of each other (or the wall), and spinning all over the place.  That terrifies me, and while I understand racing is a dangerous sport, I also appreciate the advances that have made it safer.

Teams will make choices and those choices will play out on the track.  You can’t demand teams be given the freedom to make certain changes to their cars, and then complain when teams exercise that freedom and it turns out they made a bad choice.  Not everyone is going to get it right every week, but if you want to allow them to experiment, you have to be willing to accept a race where only a handful of cars get it right enough to stay on the lead lap.  Especially when these aero kits are changing weekly based on the results of previous races.

Will we eventually settle into a rhythm where teams are more familiar with their particular aero kit, and know exactly how to set it up and what strategy to run based on the track configuration, and we’ll be back where teams are on more even footing?  Maybe.  But isn’t that more like spec racing than allowing teams to make decisions on their own and hope they made the best decision of everyone in the field?

Personally, I thought there were many good battles for position in last night’s race.  The top-finishing drivers fought for their positions, and even though the last laps found Scott Dixon running away from the field, that was not a certainty until late in the race.  Was it the most exciting race ever?  No.  But not every race finishes with a last-lap battle and cars passing each other right to the finish line.  It certainly wasn’t a parade last night, and I will take a race that develops based on strategy and decisions made in the garages, on the track, and in the pits over a race that is determined by manufactured drama every day.

One thought on “Get Rid of this Track! Or not…” 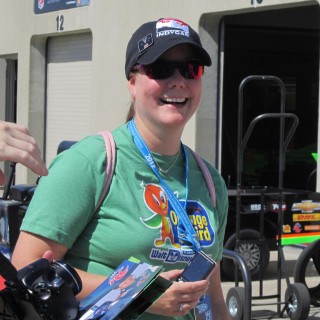